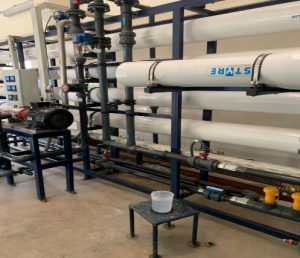 This Aqualine housing is used to filtrate 200 GPM water through 1 Micron & 5 Micron cartridge filters. It performs absolute filtration as compared to normal cartridge filters that perform nominal filtration. The system installed is Turkish in origin which is designed on 40,000 TDS in which 1.9 iron (Fe) milligram per liter concentration can be treated & with it APP Danfoss series is attached which is very efficient

The absolute rate or cut-off point, of a channel is the width of the biggest round glass molecule which will go through the channel. These distance across measurements are communicated in micrometers – or one/one millionth of a meter. The supreme rating mirrors the pore opening size of the medium. Channel media with a precise and steady pore size have a careful total rating. This total rating ought not be mistaken for the biggest molecule passed by a channel: the total rating essentially decides the size of the biggest glass dot that will go through the channel under low tension differentials and non-throbbing conditions.

What is a micron channel?

Micron channels expel earth, flotsam and jetsam, and even minuscule particles from water. The pore size of a channel cartridge is estimated in microns. The littler the micron rating, the better the particulate evacuated. Which size micron channel you need relies upon the size of the littlest molecule that requirements separating from your water. A 5-micron channel, for instance, expels particles as little as 5 microns. Anything littler goes through the pores. Silt channels are the most well-known kind of micron channel. Residue channels are like screen entryways that permit air in and keep bugs out, aside from the garbage hindered by the channel is minute.